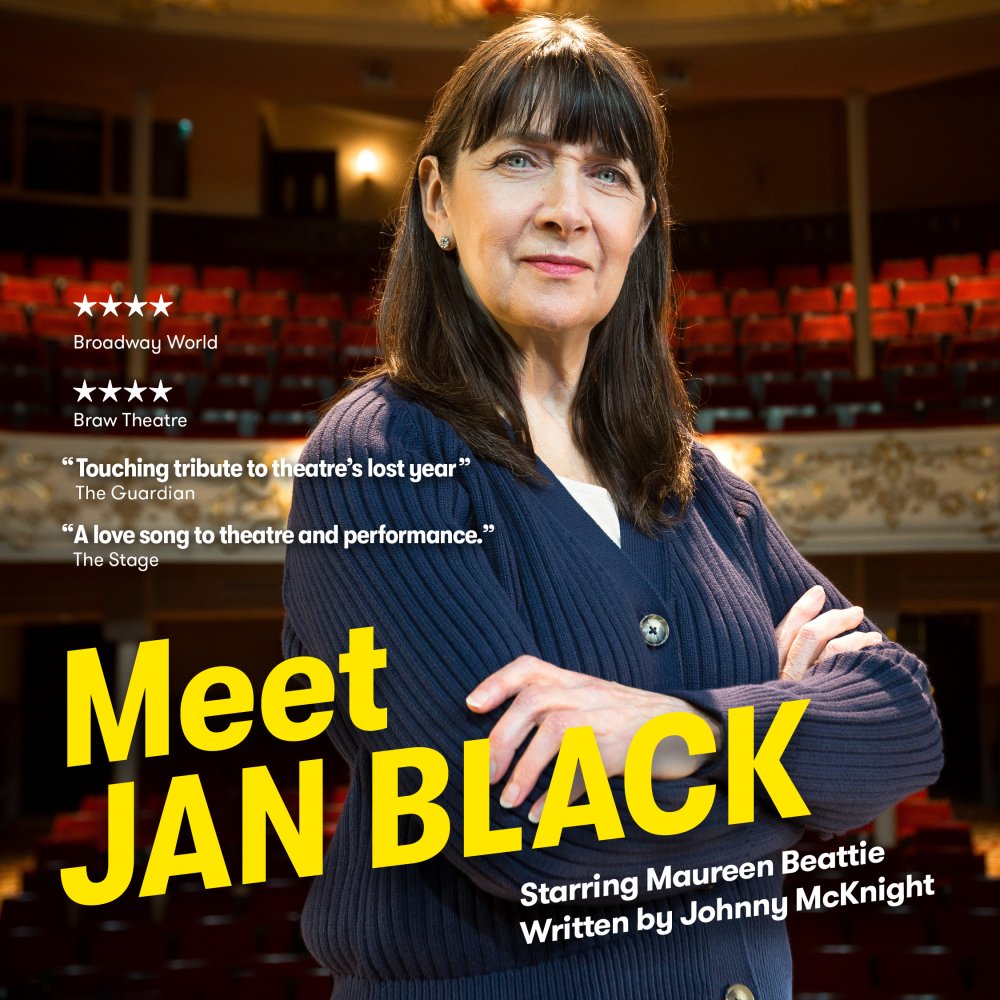 PAY WHAT YOU DECIDE (DONATION)
PLEASE NOTE – ONCE BOOKED AND YOU RECEIVE THE LINK, THIS PERFORMANCE CAN BE WATCHED AT A TIME WHICH SUITS YOU – THE TIME STATED IS OPTIONAL.
The Gaiety in association with Wonder Fools. Starring Maureen Beattie. Featuring: Ciara Brady, Helen Halpin, Anne Harcourt, Maureen McGuire, Marie McWilliams, Tricia Reynolds, Gavin Scott, Ron Swanson and Nick Wakeham.

**** – Broadway World
**** – Braw Theatre
“touching tribute to theatre’s lost year” – The Guardian
“great entertainment deserving of an audience”- The Daily Record
“Meet Jan Black is a triumph for all involved and perfectly highlights our need for connection and shared experiences as both humans and as a theatre audience.” – All Edinburgh Theatre
“a love song to theatre and performance.” – The Stage

Jan’s last year was a total horror show – and she had a corkscrew spiral perm in ‘89, so she knows a thing or two about heartache and misery. But no more. It’s a New Year. A new Jan. She’s got a fire in her belly and a new show she’s desperate to rehearse. After a full year am-dram company The Gaiety Whirlers are back and ready to take to the stage. Only… Lockdown’s still not been lifted, has it? But Jan is determined and channelling Queen: the SHOW must go on – she just has to navigate rehearsing over zoom, dealing with a most unwelcome participant, oh and the small matter of how the hell do you do a musical when some of the Whirlers don’t even have 4G.

A new comedy that takes Year of the Rona and replaces it with Year of the Jan. It’s a show for anyone who wanted to run down the street screaming NO every time we had another zoom call to make; for those who saw the families on Gogglebox more than their own; and for all us who want to put that last year behind them and get back in the theatre, to return to that sense of being together as a community. A hilarious show guaranteed to make us feel closer to each other than we have all of last year.

Are you ready to meet Jan Black?

And special thanks to the Gaiety Team involved in this production.